“I’m human just like everyone else”, Annastacia Palaszczuk said, her voice wavering as she finished her daily coronavirus briefing on Friday.

“These are difficult decisions and they’re heartbreaking,” the visibly emotional Queensland premier said.

“These issues hurt me deeply. They hurt me deeply because during this pandemic I have lost loved ones as well. I know exactly what people are going through.”

The Queensland election will be held on 31 October. The campaign, already consumed by the pandemic response and recovery, has trained national focus on the state’s border closure.

Polling has consistently shown widespread support for the Palaszczuk government’s “Queensland first” handling of the pandemic response. The Liberal National party opposition, which called for the state’s borders to be opened in June, now supports the ongoing closure. 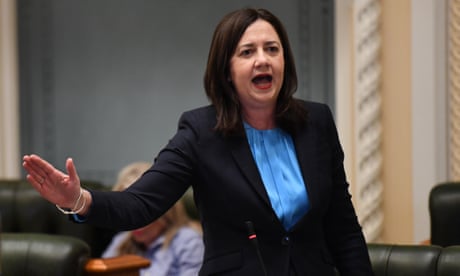 This week, as Queensland’s usually warm weather took a bitter turn, Palaszczuk found herself under attack – led by the prime minister, Scott Morrison – over her state’s refusal to allow a Canberra woman to attend her father’s funeral

At her briefing on Friday, Palaszczuk’s usually resolute demeanour faltered briefly. She made clear she would not equivocate on the border.

“We’re in a global pandemic at the moment,” she said. “It is tough on everyone.”

Since the first outbreak of coronavirus, Palaszczuk has deferred to the state’s well-regarded chief health officer, Jeanette Young, as the principal adviser and decision-maker around border restrictions, exemptions and other public health orders.

Graeme Orr, a political law professor at the University of Queensland, told the Conversation the law clearly stated that any decision to allow someone out of quarantine should be made by Young, and that it would be “highly inappropriate for a minister to intervene”.

The influence of Young has allowed Palaszczuk to deflect criticisms that her policies have been electorally motivated.

“Let me make it very clear: I don’t make those decisions,” Palaszczuk said on Friday.

“I said to the prime minister, I would refer [the case of Canberra woman Sarah Caisip] to the chief health officer and I did that.”

Young has previously said she was personally making all exemption decisions, but that a “very large numbers of requests” had started to come through.

Her comments on Thursday, about quarantine exemptions provided to the actor Tom Hanks and others, have been seized upon by critics, who have questioned the consistent line that public health advice has trumped all other considerations.

When asked about Hanks, Young said: “I have given exemptions for people in entertainment and film because that is bringing a lot of money into this state and, can I say, we need every single dollar in our state.”

The comment has emboldened the attack on Palaszczuk from critics, who say decisions lack consistency.

Claims of double standards include exemptions provided to rugby league and Australian rules players and club officials – including roughly 400 AFL executives, staff and their families who flew into the Gold Coast ahead of the announcement Brisbane would host the grand final.

“The premier has turned the borders into a political weapon and it’s just unacceptable,” the opposition leader, Deb Frecklington, said.

“We do need strong border controls, but we also need common sense, consistency and a bit of compassion.

“The system is broken and needs fixing.”